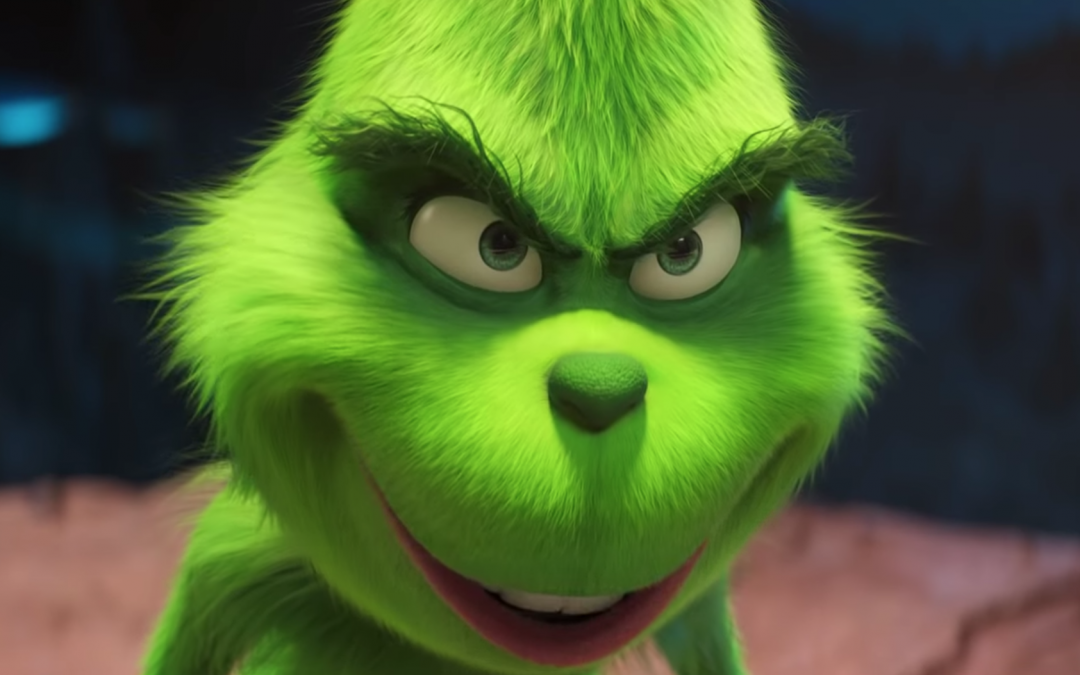 Though he’d been acting for almost a solid decade before, English actor Benedict Cumberbatch truly burst onto the world’s stage in 2010 with the brilliant detective series Sherlock. From there, this dashing thespian snagged a string of A-list roles in such memorable movies as 12 Years A Slave, The Imitation Game, Star Trek: Into Darkness and Doctor Strange. But there’s more to Cumberbatch’s career than meets the eye. See, the captivating performer has also been building a reputation as a sensational voice actor.

To celebrate the release of his latest foray into voice work, Dr. Seuss’ The Grinch, we’re taking a look at the talented actor’s illustrious voice acting career. Here are all of Benedict Cumberbatch’s voice acting roles – some might surprise you!

The Grinch, ‘Dr. Seuss’ The Grinch’

He’s a mean one, Mr. Grinch. The curmudgeonly Dr. Seuss villain is the leading man of the latest animated adventure from Illumination Entertainment, who brought us the daffy joys of Despicable Me, Minions and The Lorax. You might think you know how the Grinch stole Christmas, but Cumberbatch and his crew give this classic story a new spin complete with surprising Whoville hijinks, whimsical Rube Goldberg machines, and a uniquely silly Grinch. As the Grinch, Cumberbatch brings grumbles and grins as the greenest antihero the holidays have ever seen.

Before his breakthrough with Sherlock, Cumberbatch could be heard on BBC Radio 4 as part of the cast of this radio sitcom. Cabin Pressure followed the quirky crew of a small airline called MJN Air, and Cumberbatch played perky pilot Martin Crieff. The show ran from 2008 to 2014, but this wasn’t his only radio playtime. In November of 2008, he participated in the Doctor Who special Forty-Five, portraying real-life British archaeologist Howard Carter. Then in 2013, Cumberbatch joined a voice cast that included James McAvoy, Natalie Dormer, and Christopher Lee for Neverwhere, a radio play based on Neil Gaiman’s urban fantasy novel.

The Prime Minister/Severus Snape, ‘The Simpsons’ (2013)

Did you know the Sherlock star does a killer Alan Rickman impression? What might be a fun party trick for some has become a recurring delight to Cumberbatch fans, as he’s trotted out this special skill on Late Night With Jimmy Fallon and a special appearance on The Simpsons. In the Season 24 episode “Love Is a Many Splintered Thing,” Bart and Homer look for tips on romance in a British rom-com called “Love, Indubitably.” Modeled after Love Actually, the faux film features the Hugh Grant-looking Prime Minister confessing his love to his “poor but cheeky secretary.” As the couple kisses while Parliament cheers, Harry Potter‘s Severus Snape makes an inexplicable appearance to declare, “Love is more powerful than all my magic!” Listen closely, and you can hear both are clearly Cumberbatch!

With an English accent as smooth and seductive as a fine wine, it’s little wonder that Cumberbatch has been asked to be the narrator to a string of documentaries. From a film centered around Zen Buddhist monks (WALK WITH ME) to one about a batch of young pachyrhinosaurs (WALKING WITH DINOSAURS: PREHISTORIC PLANET) to a series on the works of theoretical physicist Stephen Hawking (STEPHEN HAWKING’S GRAND DESIGN), Cumberbatch knows how to voice a compelling story. But his most beloved bit of narration came from the 2009 BBC nature doc series SOUTH PACIFIC (also known as WILD PACIFIC), and all because of his charming mispronunciation of the word “penguins.” Cumberbatch can’t help but say it like “peng-wings.” After the internet went wild for a clip containing the error, he joked about it on THE GRAHAM NORTON SHOW. But the penguins would have their revenge, driving him–well, his character–mad in an adorable animated adventure.

This 2014 spinoff of Madagascar stepped up its quirky quartet from comic relief to leading penguins! But not everyone loves these silly birds. The feathered foursome is a real pain in the hide to Cumberbatch’s character, a gray wolf with an English accent and little patience for the titular team or their devotion to crunchy cheese curls. As head agent of an elite undercover interspecies task force known as The North Wind, this no-nonsense wolf’s name is classified–which our penguin protagonists mistakenly think means he’s called Classified. Cumberbatch brings a bit of Sherlock-style exasperation to this espionage comedy for kids, proving a perfect foil to the charmingly daffy penguins. He even manages to bring an air of sophistication to fart jokes like, “No one breaks the North Wind.” Seriously, what is it with Cumberbatch and penguins being a thorn in his side?

Himself, ‘Family Guy: The Quest For Stuff’ Benedict Cumberbatch as himself on “Family Guy”

The irreverent cartoon series Family Guy is famous for inviting celebrities to voice themselves in cameos. Cumberbatch hasn’t yet popped by on the series proper. However, he can be found in the 2014 video game spinoff, Family Guy: The Quest For Stuff. There the esteemed English star is a Quahog character who can be unlocked, where you can hear him saying such witty lines as: “No, I’m not Doctor Who.” Cumberbatch is one of a slew of stars who make cameos in the game, including Alice Cooper, Bryan Cranston, Felicia Day, Nathan Fillion, Avril Lavigne, Ron Perlman and Arnold Schwarzenegger.

Dante, ‘Girlfriend In A Coma’

This title might make you think this movie is a maudlin melodrama. But actually, it’s a daring documentary–named for a hit song by The Smiths–that explores the politics, economics and morality at play in modern Italy. And unlike many of the docs on Cumberbatch’s filmography, this one does not feature him as its narrator. Instead, he was brought in to read passages from Dante Alighieri’s Divine Comedy, a long narrative poem that was completed in 1320. These excerpts are used to trace the roots of Italy’s virtues and vices, while Cumberbatch’s deep voice bolsters Alighieri’s words with a stirring conviction.

In 2016, Cumberbatch slid into an American accent and cocky swagger to play the arrogant antihero of Doctor Strange. But this surgeon-turned-superhero wasn’t the only role the crafty actor took on in the flashy MCU film. Cumberbatch also lent his voice to its big, bad, extraterrestrial deity known as Dormammu. This means that in this movie’s memorable time-loop showdown, Doctor Strange was–in a sense–his own worst enemy. And it was actually Cumberbatch’s idea. He told Cinema Blend, “I went, ‘Look, if this is going to work, rather than being a big ghoulish monster, if it’s some kind of reflection of him–if it’s something that he’s giving that’s coming back at him in a really horrific way, that would be fun! And I’d be happy to do the voice for it [and do] facial capture.’ And they were like, ‘Really?’ ‘Yeah, okay.'” He makes it sound so easy.

Doctor Strange wasn’t Cumberbatch’s first experience with motion-capture or even lending his voice to a gigantic villain. For Peter Jackson’s Hobbit trilogy, Cumberbatch gave his voice and a full-bodied mo-cap performance to breathe fiery life into J.R.R. Tolkien’s ferocious dragon, Smaug. He brought a deep growl and serpentine physicality to the audition, which caught Jackson’s attention. “He was able to produce the character simply by his voice,” the revered director shared in a behind-the-scenes featurette, “And he knew Smaug. He understood Smaug as well as we did.” Cumberbatch credits his dad for that, noting he’d read Tolkien books to him as a kid, acting out each voice and “living out all the parts.” Cumberbatch added with a chuckle, “So, I basically ripped my dad off for my performance!”

The Necromancer, ‘The Hobbit Trilogy’

Smaug wasn’t Cumberbatch’s only role in the fantasy franchise. He first appears in The Hobbit: An Unexpected Journey, though “appears” might be a strong word in this case. As the Necromancer, he is a CGI figure of darkness and fire with a sinister voice to match. As he would for Smaug in later movies, Cumberbatch was put in a special tracking leotard and had his face precisely painted with white dots to allow the films’ visual effects teams to convert his facial expressions into that of the diabolical creature. And this role was actually trickier than Smaug, as it required Cumberbatch to speak only black speech, Tolkien’s concocted language of Mordor. For each of the three films, this dedicated performer had to learn all his Necromancer lines phonetically, and sometimes backwards.

Cumberbatch isn’t done with voicing villains, and we’ll hear his distinctive growl once again. Next year will bring the premiere of Mowgli, a live-action adaptation of Rudyard Kipling’s The Jungle Book. After more than a decade pioneering the emerging discipline of mo-cap performance, actor-turned-director Andy Serkis leads a star-studded cast through the process as Christian Bale, Cate Blanchett, Naomie Harris and Peter Mullan play untamed animals opposite young Rohan Chand’s spirited man-cub. Expect wounded roars and dark tones from Cumberbatch, who’s set to play the film’s ferocious tiger, Shere Khan. “Benedict is just–of course–a most magnificent choice for this character,” Serkis said in a behind-the-scenes video, “Not just because he plays him not just as a black-and-white villain, but as a damaged individual.” Mmmmm…Are you ready to sympathize with a man-eating jungle cat?